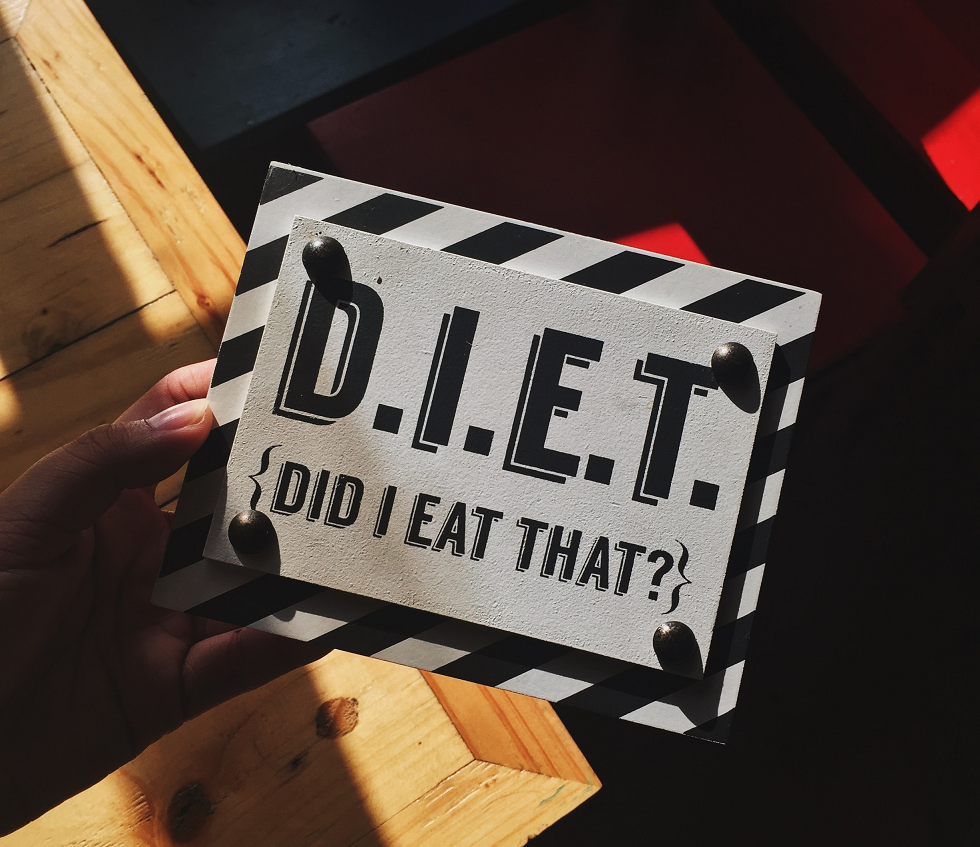 The myth of ‘Calories don’t count’

This is akin to the trend of news and comment articles with the heading format, “Everything you thought you knew about XX is wrong”. The statement is not just condescending and a cheap marketing ploy to suck you in, it’s usually wrong – or at least mostly wrong. That’s the case here.

Calories do actually count. They’re just not the only thing that counts when it comes to achieving an energy balance (energy intake to energy expended) that enables weight loss or weight maintenance.

It comes down to what response those calories elicit from the body. So two people could each eat and drink 2500 calories, yet they could each experience great differences in:

Explaining all the elements that can affect the points above can get a bit complicated, which is why it’s easier for some people to say, “Calories don’t count”. So here’s a quick rundown on factors that have an impact on your body’s reaction to a set number of calories.

For all my life, my father’s attitude to food seemed like we are all heading off on a mission to Mars, or walking to the North or South pole – that is, there is little to no point in a food unless it is as calorie rich and fits into as compact space as possible. Only early this year, I made papadums (cooked in microwave, not fried) to eat with a dinner I’d prepared. He said, “They’re like eating air – what’s the point?”

Several years ago, researchers showed that we get accustomed to eating a certain volume of food. In their studies, people were put on a diet with a significant reduction in calories, but the volume of food was still the same as they usually ate, and they still felt satisfied. Obviously, there are limits to the extent to which this works, but the studies emphasized the influence of eating lower density foods and foods with higher water content in weight loss diets.  This is one of the problems with home-delivered weight loss meals such as Lite ‘n’ Easy – the calories are low and the nutrient balance might be OK, but for transportation costs and convenience, the food volume is very small.

Fibre is not as sexy or open to targeted branding opportunities as so-called ‘superfoods’, so it’s often neglected in talks about diet and weight loss. Fibre is a big factor in lowering overall calorie density of our diet and increasing food volume so we feel “fuller”, but it’s also much more than that.

Fibre assists digestion so we have a better chance to extract nutrients out of our food. It also helps us have more gut bacteria and a greater diversity of gut bacteria, which in turn affects many aspects of our health. It helps lower cholesterol and maintains bowel health. And here’s the big one – it helps regulate blood sugar.

If you’ve heard of the Glycemic index or know a bit about how type 2 diabetes works, you know that high loads of simple sugars can mess with your blood sugar regulation. Fibre helps slow the sugar rush into the blood. This is one reason why if you eat or drink something sugary or eat highly processed carbs, it’s good to have it with or follow it with some fruit or raw vegetables.

My father, a doctor, was on the money when he would say, “Your body will always tell you what it needs.” The problem with this point is that our mind can exploit this to tells us all kinds of bullshit (see ‘sugar/alcohol addiction’, ‘comfort foods’, ‘habitual eating’, etc.). The other main issue is that we then go looking in the wrong places for the nutrients we lack.

There is a well-studied behaviour where people on low nutrient diets will keep eating more food than they need because their body lacks certain nutrients – that is, they will eat a lot of something with a low level of that nutrient, rather than a small amount of something with a high level of that nutrient. This is one reason why people in lower socio-economic groups often have higher obesity rates. The upshot of this is that people with a more nutrient-dense diet can feel more satisfied and more energetic on a lower calorie diet than someone on a higher calorie diet with less nutrients or a more unbalanced nutrient profile.

Over the last five years, one of the biggest news stories in nutrition and health is the impact of the gut microbiome on our health – and we just keep finding more ways that it influences functioning of both the body and the brain. The more diverse the gut bacteria, the better – and the way to achieve this is by eating a diverse range of healthy foods.

It is also much easier to get the vast range of vitamins and minerals we need by eating a wide range of foods. Even a diet that appears very healthy but is very limited in its range of foods can have a big gap where some nutrients are missing. For example, I worked with bodybuilders who would eat steamed chicken breast and broccoli on brown rice five or six lunches a week – each of the three ingredients is ‘healthy’ and has valuable nutrients, but eating it every day comes at the cost of other nutrients that are missing from these foods.

I have often been asked, “What do you eat?” My usual response has been to open and close my mouth like a fish because I’m not sure where to start. They want a simple answer, a namecheck of a magic food or some major omission, but there isn’t one. What I eat over the course of a week may not change much the following week, but day to day, there is variation. I don’t eat the same breakfast every day, or lunch, and certainly not dinner. But if you look at the types and volumes of those types of food I eat week to week or month to month, it wouldn’t vary much.

I guess my eating philosophy is to emphasise what I call ‘nutrient density’, and food diversity plays a part in this. So instead of thinking about things that I cut out of my diet, I think more about what I need in my diet in terms of nutrients. It’s kind of a daily checklist. This way, if I make sure eat a range of nutrient-dense foods each day, then I have some room for some ‘empty calories’ (nutrient-por foods) if I want.

Alcoholic drinks are often high in sugars (but some spirits are very low), so they come with all the hazards of other foods with high concentrations of simple or added sugars. However, there are two other less obvious problems with alcohol.

How to cook healthy

First, alcohol is treated like a toxin by the body, so anything over a small amount distracts the liver from the work it’s supposed to be doing for digestion and nutrient uptake. The second point follows on from this. When alcohol is present in the bloodstream, the body makes the processing of alcohol the priority and calls for a go-slow on fat, carbohydrate and protein oxidation. Because fats take longer to oxidise, they are pushed to the back of the queue, so you end up with fat being deposited in specific areas – like the belly. This is why you can see alcoholics, even homeless ones, who barely eat, but still have a “gut”.

Eating simple carbs and sugary foods might be an efficient way to keep up energy through hours of activity, but it’s terrible at other times. In excess, they can confuse your body’s response to the hormone insulin. The relationship status between sugars and insulin is definitely ‘It’s complicated’, but here’s a very basic rundown.

Let’s say you eat 50g of carbohydrate in sugary lollies or you can eat 50g of carbs from rolled oats. After processing by the body, both will supply the same amount of energy to your muscles. Along the way, a hormone called insulin is produced by the pancreas to move sugar from your blood into cells where it can be used for energy, or move it into storage for energy later. The simpler the sugar, the bigger the ‘spike’ in production of insulin required. If this happens a lot over time, the cells get kind of exhausted from the interaction with insulin, so they kind of conduct a slowdown, like some surly workers who have had enough of working too many hours without overtime – this is called “insulin resistance”. So the pancreas produces even more insulin to get the same work done. Now the cells are resistant to insulin’s effect on blood sugar uptake, but they’re still responsive to the hormone’s role in storing fat. And this is the vicious circle of Type 2 diabetes – people feel without energy, they feel hungry, but they’re getting fatter.

Some foods – usually fibrous vegetables – are calorie neutral. That is, the energy needed to process the food in the body is equal to or sometimes greater than the calories they contain. This seems highly inefficient for energy, but the food still provides nutrients and the fibre has its purpose.

Bioavailability is how much of the food’s macronutrients (fat, protein, carbs) and micronutrients (vitamins and minerals) can be used by the body. This works both ways. For example, if you are looking for protein, the body can utilize a higher proportion of the protein in an egg than that in red meat or beans. However, the bioavailability of some plant proteins and the iron in plants can be increased by combining them with the appropriate foods. Then you have a food like almonds. All nuts have a range of nutrients in them, but they are all high in fat. However, in almonds, 10-15% of the fat is not bioavailable to the body (it is passed out), which gives them an edge over other nuts unless you really need that fat.

Some foods actually help raise the basal metabolic rate, although the effect is not large. These include:

So limiting calories still has its value, but there need to be equal emphasis on how to get better nutritional value from those calories – that is, get a greater nutritional or health benefit per calorie.