Building a better runner from the ground up 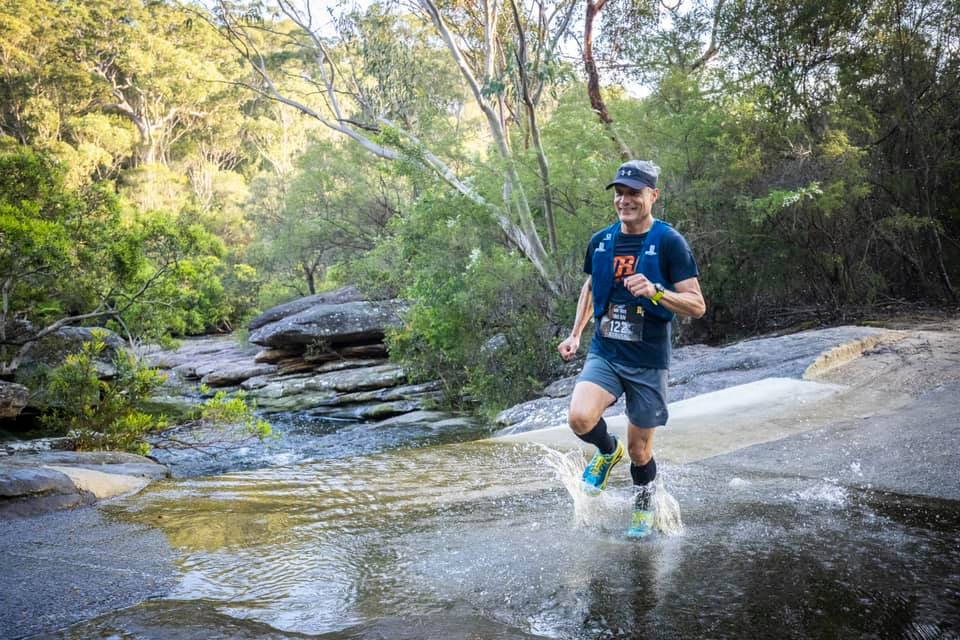 I first met Kurush Kasad in 2019 at an ‘Education Evening’ organised by his running club, Northside Running Group (NRG), where I was presenting a talk on how to work strength training into a running program.

Kurush planned to run his first trail ultramarathons in 2020 – Six Foot Track (46km) and UTA 50 (50km). However, when he picked up an injury (Achilles tendinopathy on the right foot and plantar fasciitis on the left) while training for his 2nd marathon in 2019, he soon realised that he would not be able to run at all until the injury healed. He did manage to run the marathon, but in the following weeks he could barely put any weight on his left foot, never mind run. This was Kurush’s first long layoff through injury. He was frustrated by not being able to run while his clubmates went out on some seriously long trail runs.

Kurush started strength training with me once a fortnight in November 2019 after I first consulted with his physiotherapist. He was 50 at the time. His left foot in particular was in a bad way – he had no confidence or balance with it, and this took months to overcome, but Kurush still remembers what I said to him in that first session:

“Just because you can’t run, doesn’t mean you can’t do other stuff”.

I targeted the right combination of muscles for Kurush to strengthen, while being mindful of his injury. This often involved working on his stability, from his toes to ankles and calves, to legs and glutes, all the way up to his midsection. Kurush went to a gym to train himself in between sessions with me. I followed up with Kurush on his injury and tweaked his training program as his foot and Achilles slowly healed. I also provided exercises he could perform barefoot outside the gym on sand and grass, so that he would learn to use the muscles of his feet so that in future he would be able to control the stretch on his plantar fascia and Achilles as he runs. As he progressed, I suggested that he start stair training (walking) as a means to train specific fitness and muscle conditioning for trail running without the stress on his injuries that running would bring. Although this was beyond the scope of my program, I provided Kurush links to various locations around Sydney and suggested he complete loops of these stair courses every week and treat these as the equivalent of his long run sessions.

Kurush will tell you, just how much my training programs have helped him become a stronger and better runner. By following my strength training programs at least 1-2 times a week and running ‘sensibly’, Kurush finally recovered from his injury in March 2020.

The COVID-19 lockdown and subsequent gym closures meant a temporary suspension of Kurush’s personal training sessions. I stressed to Kurush the importance of continuing strength training at home by providing simple ‘do at home’ exercises, based on equipment he had available. To his credit, Kurush continued these training sessions at home – something many runners struggle to do. What’s more, he dropped a stack of weight.

Some runners may tend to put on weight due to long layoffs from running caused by injury, however Kurush did quite the opposite! Although never fat, Kurush took the time to learn about the foods he was putting in his mouth and simply made some sensible decisions about food choice and portion size – that was it. From February to July 2020, he dropped 14kg.

Kurush continues training with me and has just completed the first of four big runs he will do over the next  three weeks. Despite a fall where he cut himself up, he ran sub-2 hours at the Bare Creek Trail Run 20km, finishing 7th of 32 in his age category. The next three weeks will test the resilience we’ve tried to build up in his body with strength training, as he attempts the Stromlo Running Festival 30km, the UTA50 course with his running friends, and the Coastal Classic 30km.

Coaching for individuals and pairs or small groups is available for running-specific goals (as well as any other activity-specific goals).

Training is available at North Sydney PCYC, outdoors (North Sydney Council area) and remotely. Alternatively, Dom also provides detailed strength and mobility assessment with a program designed for you to do on your own with whatever resources you have at hand

If you are injured, now is the time to train strength so that you can safely “work around” your injury while developing better strength, power, techniques and resilience in problem areas so you can return to your activity better. Train to live better, train to harden up so your body breaks down less. Email: