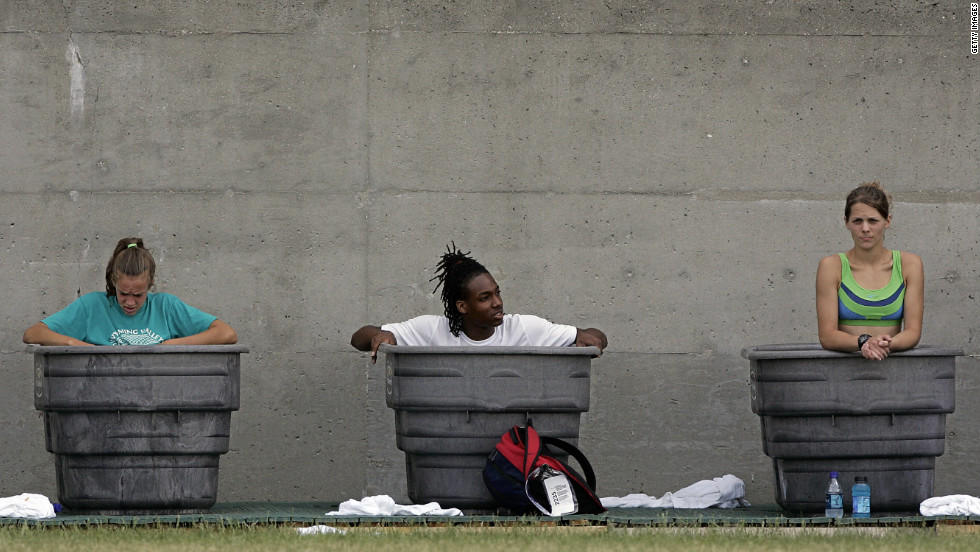 Pool old Paula Radcliffe. In her autobiography, the great British long distance runner and world record holder for the women’s marathon, reveals her hatred for the post-training ice baths she helped make popular among athletes, calling them “absolute agony”. Today, researchers are questioning whether they do anything at all for recovery.

In theory, the principle of ice baths, cold water immersion and packing various body bits in ice after training or competition was pretty cool.  It was argued that using ice on a regular basis could reduce muscle damage and delayed onset muscle pain and soreness (DOMS) which occurs between 24 and 72 hours after exercise, and therefore speed up recovery. Ice was thought to:

Then, with rewarming, the increased blood flow speeds circulation, and in turn, improves the healing process.

Now researchers are coming to the conclusion that unless you’re racing in consecutive events or are injured, then you’re better off skipping post-exercise ice and letting your muscles build back up on their own. Some coaches even argue that all ice does is pool lactic acid (a necessary waste product produced by the body during intense exercise) and make it more likely to be sore the next day.

Of course, many people simply feel better after an ice bath – and if that’s you, then you may not consider that there’s enough weight of evidence to suggest you should stop.

The new principle can be summarized thus: harden up princess and stop looking for the easy way out.

Ultimately, your body needs to go through a bit of the natural process rather than trying to inhibit it entirely with ice and NSAIDs. Now more emphasis is back on the cooldown in the form simple aerobic exercises, very light resistance exercises and dynamic stretches. These can produce a “pumping effect” to clear lactic acid from the muscles.

Ibuprofen-based drugs aren’t the answer, either. Way back in 2002, a study in the American Journal of Physiology-Endocrinology and Metabolism found that ibuprofen inhibited protein synthesis in muscles after high-intensity exercise, while a 2006 study published in Medicine and Science in Sports and Exercise found that ibuprofen pissed off some powerlifting rats because it stopped them getting stronger.

The study on the rats (now furious that they’d lost 5g off their one-rep maximum bench press) helped show that inflammation is one of the body’s signaling pathways. “Ouch, we’re damaged,” it signals to the rest of the body. “Come help us repair, build us stronger so we can hack it better next time.” So knocking out the inflammation completely with ice and anti-inflammatory drugs means the body won’t adapt as much as it would if we just left it alone.

In recent years, some of the key studies turning up the heat on post-exercise ice treatments include:

2006 – a Japanese study published in the European Journal of Applied Physiology gave men cycling workouts. After each one, the subjects would put only one leg in an ice bath – the other was kept at room temperature. Researchers found that the non-iced leg gained more strength, circulation and endurance. The scientists wrote, “[ice baths] retard rather than support the desired improvement of muscular performance.”

2007 – a study in the British Journal of Sports Medicine found that ice-water (5 degrees C) immersion after heavy weight training did not reduce swelling or tenderness in the muscles. In fact, the athletes reported more next-day leg pain when going from a sitting to a standing position than those who had soaked in a tepid bath after training.

2012 – a University of Portsmouth study published in the European Journal of Sport Science compared post-exercise water immersion therapy at 12°C and 35°C, as well as a group who simply did 12 minutes walking at 5km/h. Muscle soreness, maximal voluntary contraction of quads and hamstrings, hop distance, creatine kinase activity (an indicator of muscle breakdown) and myoglobin concentration (which helps oxygen-carrying capacity of the muscle) were measured at 1; 24; 48 and 72 hours after exercise. The results showed no difference between groups in any of the parameters, indicating that cold water immersion had no effect on muscle recovery, performance or perceived muscle soreness when compared to warm water immersion or an active cool-down.

2015 – a study published in the Journal of Physiology examined how the restriction of blood flow to muscles caused by cold may affect the regeneration of muscles after exercise. The study showed that when study participants did a three-month course of strength training, they made smaller gains in muscle mass and strength when they took ice baths.

But let’s get something straight – there’s a difference between muscle recovery from exercise and recovery from major trauma. So ice post-exercise can still be useful to, say, the rugby player who get hammered and has bruises and sprains after a match, because that internal bleeding and excessive swelling can lead to secondary damage and can delay healing. Leave the ice or cold water on for only about 20 minutes at a time, or until the affected area gets numb.

Of course, many people simply feel better after an ice bath – and if that’s you, then you may not consider that there’s enough weight of evidence to suggest you should stop. But why would it make you feel better then? Well, for a start, the resulting rise in the neurotransmitter norepinephrine increases vigilance, arousal, attention and motivation, and cold water swimming has even been used as part of treatment for depression.

One alternative to ice that has gained popularity for use post-training or event is compression. Studies have shown mixed results, and some studies were not the most rigorous – some came from sportswear companies (although there are studies that are heavily touted by sportswear companies that were not paid for by those companies – they just liked the results) and others lack details about the type and strength of the compression, which makes their tests hard to put into context with commercial products.

However, an AIS (Australian Institute of Sport) study completed in 2010 measured swelling in the muscle and blood lactate levels both before and after a one-hour recovery period in athletes wearing 2XU compression tights after cycling training. Both were lower among the athletes wearing tights compared to a control group, while perceived muscle soreness was also lower. (NOTE: some studies suggest that to get optimal benefits from compression, you need to wear it for a few hours or more – it’s good to have compression that is comfortable to sleep in.) No money sponsorships or even Freddo frogs were on offer to the athletes wearing the tights – like the rest of us who train hard, their only interest lay in the fact that they hate it when they’re sore all the time.

Even if the benefits of compression post-exercise are marginal or variable, one advantage of compression over ice baths is that it is a passive element of recovery that doesn’t restrain active recovery, so you can get a 2-for-1 recovery deal. In other words, I can put long tights on after my last set of lifting or put a compression top on straight after kayaking and go straight into light mobility exercises and stretching in that all-important 20 minutes post-training, plus I can have my recovery food or drink at the same time – because my teeth aren’t chattering.