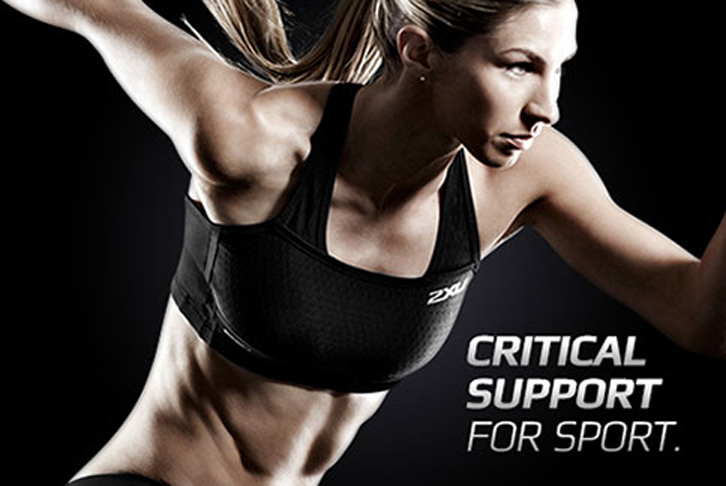 It’s mind-blowing to think that sports bras only came about in the 1970s, because as far as I understand, women had breasts before this time and they ran around and did sports, too.

A 1975 sports bra prototype by Glamorise Foundations was called the ‘Free Swing Tennis Bra’, a name which inspired zero confidence – which was fitting, since zero is about how much support it offered, according to Deadspin. Another prototype was made by stitching two jockstraps together. Developers Lisa Lindahl and Polly Smith called it the ‘Jockbra’, but the model had more success after the two women teamed up with Hinda Miller to create the ‘Jogbra’ in 1977.

We’ve come a long way since then, but it seems a lot of women don’t realise just how far. A 2010 study published in the Journal of Physiotherapy found that 88% of female adolescents wore a bra during sport that did not fit correctly, while 85% failed a simple knowledge test on bras and bra fit. The problem is such that in 2012 the University of Wollongong’s Breast Research Australia (BRA) and Sports Medicine Australia undertook research into the role of sports bras and deterrents to women using them.

Half of the women with breast pain said it was brought on by moderate exercise, and 64 percent said their girls hurt during vigorous exercise.

As with many studies in this area, they found that the problem wasn’t that women weren’t getting any support via bras and sports bras, they just weren’t wearing bras that provided the support that was right for them. Half of the women with breast pain said it was brought on by moderate exercise, and 64 percent said their girls hurt during vigorous exercise.
“Many females just assume bras are meant to be uncomfortable, they don’t realise that this is not right,” said Professor Julie Steele, co-author of the study.

Of course, different types of exercises cause different breast movement. Vertical motions are the real boob-bashers – horse riding and jumping, for example – along with movements involving rapid lower limb movement, such as running. These activities require   Exercises with more vertical movement of the body (e.g. compared to bike riding; jumping compared to greater breast support compared to cycling, walking and swimming.

In fact, breast pain is a problem for almost one in three (32%) of female marathon runners according to a study that surveyed 1285 female runners at the 2012 London Marathon (published in the British Journal of Sports Medicine). Little wonder – Sports Medicine Australia quotes research that shows unsupported breasts move up and down by as much as 12cm, but they also move side-to-side, and when running, they can move forward and back, too. Combined, this makes the dreaded ‘figure 8’ or ‘crossover motion. Some modern sports bras now have a support band that across the middle-top area of the breasts to cut down this crossover movement, while others have two wire-free cradle constructions to encapsulate each breast to reduce the ‘figure 8’ torture.

Here’s a terrifying graph that shows just how much bounce and movements breasts can make while running. It shows the vertical displacement of the nipple and the suprasternal notch (the top of the sternum) for a woman running at 13 km/h.

For runners, it isn’t all about the pain, either. A study at the University of Portsmouth led by Jenny White found that poor breast support can hurt your running performance and, over time, it could cause injury to your lower body.

“In a no-bra condition, we found that there was more force being exerted on … the inside of the foot,” White said. “Different bra support can affect the way we run.”

UoW researchers recommended that women with bra cup sizes D+ might require two bras (sports bra plus a crop top. However, according to Dr Joanna Scurr, who leads research into breast biomechanics at the University of Portsmouth’s Breast Health Research group, even A cup-sized women need the appropriate breast support as it is equally as effective at reducing breast movement (53% reduction compared to no bra) as it is with G cup-sized women (55% reduction).

Contrary to previous research, Scurr found that compression sports bras did not prove more effective at reducing breast movement for smaller cup-size women. Instead, the encapsulation bra (one that separates the breasts) was significantly more successful. Across all women studied, Scurr found that encapsulated sports bras reduce movement by up to 73% when compared with going braless. Some sports bras now combine compression (pressing the breast firmly to the chest) and encapsulation to reduce both up-and-down and side-to-side motion, while giving superior comfort, shape and look.

What to look for in a sports bra

Sports Medicine Australia recommends you pay attention to these six points when it comes to choosing a sports bra.

Cup
Breasts MUST be completely covered or encased in the cups to effectively limit breast movement. There should be no ‘spillage’ in any direction – you should just see two breasts, not four. On the flipside, if the cups are puckering, you might need to go down a cup size.

Underband/Underwire
The underband or underwire should follow the natural crease of the breast rather than resting on it or digging in. Soft breast tissue is not designed to tolerate underwire digging into it. For a more comfortable fit, choose a bra that uses a soft-cup or panelling instead of wire.

10 tips for Exercising at home

Front band
The lower edge of your bra between the cups should sit on your breast bone, not on your breast tissue. It should not gape away from your chest – if it is, you may need to go up a cup size.

Straps
These should be wide and padded for comfort so they don’t dig into your shoulders. Your main support should come from a snug band, not super-tight straps.

Material
Your bra’s material should wick sweat away from your body to keep you cool, but not irritate your skin. Crop tops should be made of strong elastic material that can compress your breasts firmly against your chest. If chafing is a problem, pay extra attention to the material of the bra instead of going for a tighter fit – it’s the wet fabric that creates friction on the skin.

Bounce before you buy

You could sprint laps around the store in the bra you intend to buy, but security might think you’re running like you stole it. Instead, try this much subtler test Joanne Scurr:

Place your feet together and squat down with your hands on the floor. Now jump up while spreading your arms and legs out – like a star jump or someone in a TV advert for Jetstar. This test causes the same breast movement that occurs during running. Finally, stretch your arms above your head and from side to side – the band of your bra should stay where it is.

Looking after your bra

Sports bras are designed to last about 25-50 washes or they should be replaced every 6-12 months. After that, they may not be as supportive as they used to be. To ensure you’re getting the support you need, recheck your bra size and fit every six months or every time you buy a new sports bra.

Treat your sports bra the same way you care for your regular bra. For best results, wash it in cold water in a bra bag on the delicate cycle. Use a mild detergent, skip the fabric softener and hang to dry. Your bra should be washed or rinsed after every wear as salt from sweat gets into the fabric, which can deteriorate its quality and colour.

– A shorter version of this article was produced for 2XU international.