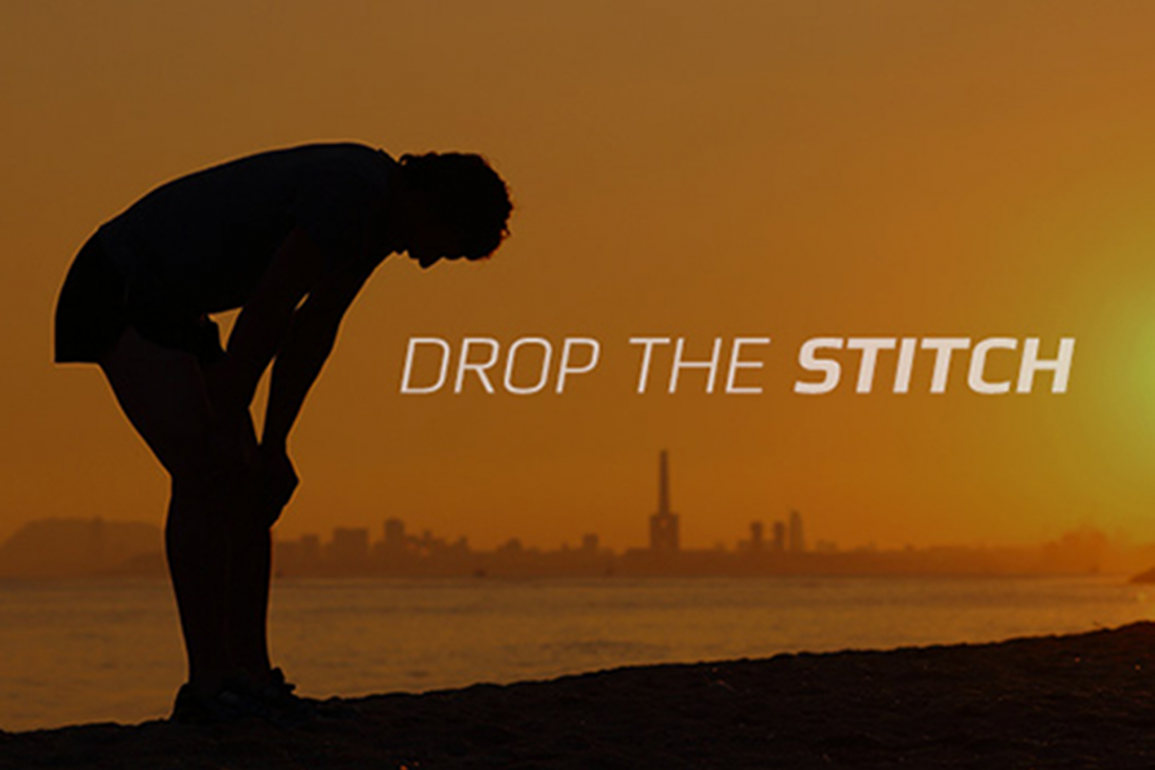 Side stitches have been one of the more nagging and misunderstood pains in sport. In fact, it was once believed that stitches were the result of the gods of sloth, such as Aergia (Greek), Murcia (Roman) and Fegor the Overlord of Sloth (PlayStation Trillion: God of Destruction), attempting to rip out your intestines from the inside as punishment for running, swimming, etc. Strangely, this theory had more veracity than many other common explanations for stitches.

Here’s an explainer that will help you avoid and treat that thorn in the athlete’s side.

Stitches are a bit like a one-night stand with an attractive idiot while tipsy – most of us have had one, we just didn’t understand what it was at the time.

Stitches are not cramps, and they’re not a diaphragm disorder, either. These were ruled out by a study in 1999 (Morton and Callister) that proved that during a stitch there is none of the intense electrophysiological activity that characterises a cramp, nor is there a change in lung performance before and during a stitch.

…it’s more about the weird and obscure ways things get connected in your body, much like how Facebook will have a hermaphrodite juggler at the Centre for Reformed Pedophiles in your ‘People you may know’ list.

Many athletes get their stitch low in the tummy, others right up under the ribs, while some even get it in the shoulder, but they all originate from the same place – the peritoneum. This is a two-layered membrane that separates the abdominal muscles from your guts. There’s the visceral peritoneum and the parietal peritoneum, which is the layer closest to the muscles. In between these layers there’s lubricating fluid, but sometimes the lube isn’t enough to stop irritation. In effect, you get a dry friction which result in the irritation we know and hate, the stitch.

The lube can run dry due to the reduction of blood flow to the abdomen or from increased movement of the diaphragm from exercise, or there could be friction from an organ such as the stomach being distended after a meal.

That all makes sense if you get stiches in your side, but what happens if you get that sharp, knife-twisting pain in your shoulder? Well, it’s not that you’ve eaten so much your guts have been squished up to your shoulder, it’s more about the weird and obscure ways things get connected in your body, much like how Facebook will have a hermaphrodite juggler at the Centre for Reformed Pedophiles in your ‘People you may know’ list. As it turns out, the parietal peritoneum is supplied by the phrenic nerve, which refers pain to the shoulder tip region.

You’re more likely to have a stitch if you’re unfit or new to an activity, exercising very hard, dehydrated or have a full stomach. Stitches are especially common among newbie runners because the abdomen is not used to all the jostling (conversely, lack of torso movement is why stitches are a lot less common in cycling).

Some actions or sports are more prone to stitches than others. Here’s the breakdown from a survey of 965 Australian athletes who had a stitch in the previous year:

The missing factor in the figures above is familiarity with the activity. Even a reasonably fit person can get a stitch when they do a new activity, because when we have a go at something new we often take time to adapt to the breathing rhythm that’s required. Often we’re so distracted by all the new stuff we need to think about and coordinate that we forget to do the basic stuff, like breathe, or at best our breathing is faster and shallower than it should be. On top of this, some activities have a more complicated breathing activity than others – boxing and swimming are good examples, and balls sports can be too, especially when there’s contact involved. Once you work out the rhythm of the breathing and relax so you breathe more deeply, you’re less likely to get stitches from a new activity.

The ability to breath deeper and slower helps because it puts more pressure down through the peritoneum to stop organs jostling and creating friction. Most people find that stitches go away as fitness increases and they have some familiarity with the activity they are doing.

Tennis fans might have noticed players sipping from two bottles, one with an isotonic or soft drink, and another with water in it. They know the score on stitches.

A study in Medicine and Science in Sports and Exercise showed that drinks high in sugar and/or salts are evil stitch-pedlars, whether you drink them before or during activity. High-carbohydrate fluids pass slowly through the stomach, and it appears that high-carb drinks (e.g. fruit juice, soft drinks) can cause stitches more often and at a greater severity by both distending (bloating) the stomach and by slowing fluid absorption in the intestine.

Other foods and drinks that also take the blame are fatty foods, carbonated drinks, cold drinks, apples, bananas and chocolate.

Is your spine stitching you up?

Even if none of the reasons for stitches above apply to you, there’s a chance your posture and spine could be causing your stitches. Since the 1940s, it’s been observed that people with an excessive curvature of the upper and lower spine seemed more likely to report pain from stitches. A study in 2001 (Morton and Aune) confirmed that the degree of kyphosis (forward rounding of the mid- to upper back) showed a direct and overwhelming relationship with stitch frequency. In people with scoliosis (abnormal sideways curvature of the spine), the level of their stitch pain was related to a greater degree of spine curvature. The extent of lordosis (inward curvature of the lumbar and cervical spine) had no bearing on stitch frequency or severity. This study indicated that it’s likely spinal nerves that come from the thoracic (chest) region to innervate the abdominal area are involved in stitches.

If stitches are pretty common to you, then here’s a checklist of steps you can take to cut your chances of them occurring:

If you still get a stitch…

There are lots of anecdotal remedies for a stitch, none appear to be scientifically proven. However, given what I’ve explained about how stitches work, here are two methods that will at least relieve some of the effects of the stitch (e.g. hard to breath because of pain around diaphragm).

PRP – helping you heal yourself

Slow down and drop your intensity, bend forward 45-90° while squeezing firmly just under the bottom rib and half way across between the side and the belly button (thumb to the rear and fingers at the front) and breathe deeply. Slowly stand upright again. The pain will ease more quickly if you can stop exercise to do this or when you lie down with the hips elevated.

This is one for runners only and works on the idea of synchronising the movement of your organs with your diaphragm via your breathing. Slow your pace and exhale as the foot on the opposite side of the stitch strikes the ground (not every foot strike, though). When you exhale, really push down hard with the muscles of your diaphragm. The impact combined with the bracing of the diaphragm will help release the tension causing the stitch.

– This is an excerpt from Everything Will Kill You…or Not. A shorter version has appeared on the websites of 2XU international.