How to beat ‘The Wall’ 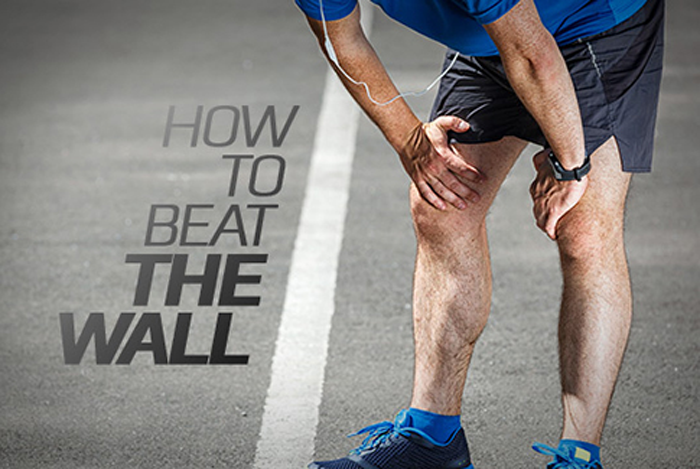 There is a way to beat ‘The Wall’ – or at least set it back in time and distance. It’s called glycogen-depletion training or ‘training low’ and it can help the endurance athlete whose event takes more than a couple hours. WARNING – there are risks of impaired recovery and immunity, plus greater stress on body in general – and it may feel terrible while you do it (especially at first), so take care with post-training nutrition and recovery. This is a case where the rule, ‘more is not always better’ definitely applies.

Glycogen vs ‘The Wall’

“Hitting the wall” in a long endurance event such as a marathon occurs when your body runs out of sugar (stored in your liver and muscles bound into large chains called glycogen). While your body can also burn fat directly for energy, it tends to prefer glycogen, as it is easier to utilise.

A study published by Benjamin Rapoport of Harvard University in 2010 showed that your probability of hitting the wall depends on the amount of glycogen you store in your muscles, how fast you run, your pacing strategy, your body size and your muscle mass. Most research has shown that most advanced runners can run for about two hours at marathon intensity before they run out of glycogen. So if you were able to burn more fat for energy, then you’d be able to make your glycogen stores last longer and you wouldn’t “crash” in the later stages of your event. Simply eating on the run won’t entirely replace all the glycogen you burn, plus your digestive system isn’t very efficient at delivering glycogen to your bloodstream when the body’s under duress from running, cycling, etc.

Turning on the fat fuel

Training in a glycogen-depleted state amplifies the activation of signalling proteins (in particular AMPK and MAPK), which, via the signals from the genes, results in adaptations like increased mitochondria – i.e. a better ability to produce energy and burn fat for fuel[i]. Over time, the body makes adaptations and gets used to both training in a glycogen-depleted state and using more fat for fuel. You can train this in a relatively short time. A Danish study showed that 10 weeks of training in a glycogen-depleted state resulted in an 85% greater increase in time to exhaustion compared with training with high glycogen. Researchers put the increase in endurance down to a larger increase in important enzymes for fat metabolism. Similar results were later confirmed in highly trained cyclists.

Honestly, it can feel terrible. If you’re training for a long endurance event, that might be part of the reason you do it – to get used to or at least recognise the sensation of low glycogen while active.

There are two ways to ‘train low’:

The benefits of both methods are proven, although there is argument over which is better. There’s no doubt that the second method takes more time and is more stressful on the body, so personally I would always advise athletes up to an intermediate level and people who have real problems with ‘The Wall’ to start with the early morning training for six sessions before attempting the double-up method.

It’s important not to overdo the frequency – once per week is plenty and it’s something best begun early in your training cycle. More frequent or extra training in a fasted state doesn’t increase the fat utilisation benefits – it will just impair performance, recovery and immunity.

Closer to a race, you should be doing long sessions in a glycogen-loaded state so that their overall quality is better, you’re faster and you’ll recover more quickly.

Once you’ve finished a fasted session, fuel up again ASAP to help recovery. Aim for 15-25 grams of protein and 60-100 grams of carbohydrate, depending on your size and the intensity of your session. If you’re doing the double-up method, you should reserve the next day for rest or an easy session.

Danish and Belgian researchers discovered that the low-glycogen trained muscles also became better at soaking up carbohydrate to store muscle glycogen when eating resumed after training. This ‘anabolic rebound’ is big news for athletes who do sports such as ultramarathons or expedition racing, where they will eat several times during the event.